The Song of the Selkie
(A new folktale with music) 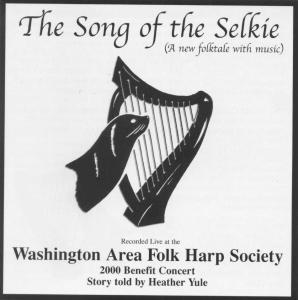 Scottish storyteller Heather Yule tells an original musical story featuring performances by a variety of harpers from the Washington Area Folk Harp Society. The Song of the Selkie is the story of Sandy, a selkie, whose sealskin is stolen from her, leading her on a long and arduous journey to recover it. The premier performance of The Song of the Selkie was recorded live at the 2000 benefit concert for the Washington Area Folk Harp Society.

"Something I am always looking to find, and usually never do, is a way to return to that childhood sense of wonder and delight over something seemingly magical. You know the feeling, all warm and snugly safe, grinning like a fool and holding your breath to see what happens next. Magic never happens when you are actively looking for it, but as soon as you stop, "BOOM!" There it is, right before you. Such is the case with this CD."
Naomi de Bruyn, Green Man Review

Loved the CD! (5 stars)
I listen to this CD frequently as I enjoy both the harp music and the storytelling. A great combination!
Anonymous

Great CD, wonderful music and story (4 stars)
Great CD! It keeps my kids enthralled, especially in the car. The harp music is beautiful, the story is interesting and the narrator has a great story telling voice.
Lyn M.

Excellent story! (4 stars)
I listened to this CD on a long drive and it was the most enjoyable time in the car! The mix of storytelling and harp music was lovely. And one of my favorite songs, Chi mi na Morbheanna, is on it as well.
Anonymous

85% of profits from this recording are donated to the Washington Area Folk Harp Society to support their educational programs.

CD: $10 each Make checks payable to Jo Morrison.
To order, send check or money order to:


Note: Due to software limitations, the normal multiple-item shipping discounts are not available at the exact price quoted here for PayPal purchases. Checks or money orders must be used to take advantage of the exact discounts, or email your order to me directly and after receiving a quote from me follow the directions to send PayPal payment to Jo at harp@triharpskel.com. Sorry for the inconvenience!

The Washington Area Folk Harp Society was founded in 1982 by a small group of friends who met to play tunes together. The society has grown to support more than 150 members, ranging from beginning harpers to professionals. It is the intent of the society to foster growth and experience for amateur and professional harpers alike, as well as to raise public awareness of the folk harp. This has been achieved through a variety of programs, including the annual benefit concert, which has supported educational programs of the society while providing a forum for professional and amateur harpers to play together in public.

The Benefit Concert 2000 provided a forum for harpers young and old, professional and amateur, to play solo and ensemble pieces within the context of an original story, as told by Scottish storyteller Heather Yule. This story was recorded live at the concert, and is presented here. Minor editing has been done to allow for a smoother flow of the story, but no additional recording was done, and performance idiosyncrasies were not digitally "fixed." This is very much a live performance.

For organizational purposes, the text of the story appears on odd numbered tracks, while the music appears on even tracks. These are index numbers only. There is no added space between the tracks, allowing the story to flow as a whole.

All tunes traditional except Aisling by Sue Richards and Neach Neamhshaolta by Lily. Arrangements by the performers, except Oliver Jack/Jack Broke the Prison Door, arranged by Sue Richards. All tunes and arrangements copyright by the composers/arrangers.
Incidental music performed by Lily and Sue Richards.
Original story by Jo Morrison, as told by Heather Yule.
Cover art by Jennifer Yust.
The album cover is Copyright © 2000 by Jo Morrison, All rights reserved.

The WAFHS would like to thank the following people for their assistance with this recording:
University Baptist Church for the use of their facilities.
James and Jane Morrison for making arrangements for use of the facilities.
All of the harpers that contributed to this recording: Kerry Bosley, Kelley Boyer, Cynthia Cathcart, Debbie Eccles, Ellen James, Marguerite Kearney, Rick Kemper, Jennifer Kubina, Walt Lazear, Lily, Gayl McDermott, Jo Morrison, Abbie Palmer, Sue Richards, Charlotte Roe, and Susan Wilzer.

A Triharpskel Production.
This page Copyright © 2000-2010 by Jo Morrison. All Rights Reserved.
https://www.triharpskel.com